Notice: Trying to get property 'display_name' of non-object in /home/gidipoin/public_html/wp-content/plugins/wordpress-seo/src/generators/schema/article.php on line 52

Belgian police have arrested six people in Brussels as a major investigation continues into attacks that claimed 31 lives in the city on Tuesday.

The arrests were made in the Schaerbeek district. There is no word yet on the identities of the suspects or their possible connection to the attacks.

Separately, in France, a suspect who was plotting an attack has been arrested near Paris, officials said.

The Brussels bombings have been linked to last November’s Paris attacks.

The arrests in Schaerbeek were made late on Thursday, and followed house-to-house searches in the area.

Residents said they heard explosions during the police raids but the cause was unclear.

Also on Thursday evening, French police launched an anti-terror operation in Argenteuil, north-west of Paris, following the arrest hours earlier of a man suspected of planning an attack.

Interior Minister Bernard Cazeneuve said the suspected militant, of French origin, was in an “advanced stage” of a plot, adding that no connection had been made to either the Brussels or the Paris attacks.

Last November, 130 people died after militants opened fire and detonated bombs in a number of locations in the French capital.

Earlier on Thursday, Belgium admitted that it had made “errors” relating to one of the Brussels attackers.

Turkey has said it arrested and deported Brahim el-Bakraoui last June, warning Belgium he was a “foreign fighter” – but was “ignored”. The Dutch authorities had also been alerted, Ankara said.

The Belgian interior and justice ministers said they had offered to resign over this but added that the prime minister refused to let them.

Brahim el-Bakraoui is one of three men – pictured in the middle on a CCTV image of them – who carried out the bombings at Zaventem airport that killed 11 people.

Unconfirmed reports say another of the Brussels airport attackers was the wanted jihadist Najim Laachraoui, whose DNA was found on explosives linked to the attacks in Paris.

The third suspected airport attacker has not yet been identified and is on the run.

There are reports of a second suspect being sought for that attack. One source told AFP news agency that a man with a large bag had been seen beside Khalid el-Bakraoui on surveillance footage at the metro station.

Meanwhile, VRT reported that investigators were working on the assumption that the cell had been planning a far bigger attack, involving Paris-style shootings as well as suicide bombings.

Links have also emerged with Salah Abdeslam, a suspect in the Paris attacks.

Abdeslam was arrested and wounded in a police raid on a flat in the Forest area of Brussels last Friday – four days before the attacks in the Belgian capital.

On Thursday, Abdeslam’s lawyer said he had changed his mind and would not fight extradition from Belgium to France.

Abdeslam, a 26-year-old French national born in Belgium, did not have prior knowledge of the Brussels bombings and had stopped co-operating with police following the attacks, his lawyer Sven Mary said.

A court hearing on Thursday on the detention of Abdeslam and two other suspects has been postponed until 7 April.

The director of the EU’s police agency, Europol, has told the BBC the network of jihadists in Europe is “more extensive than perhaps we first feared”.

Robert Wainwright said there were concerns about “a community of 5,000 suspects that have been radicalised in Europe, that have travelled to Syria and Iraq for conflict experience, some of whom – not all – have since come back to Europe” 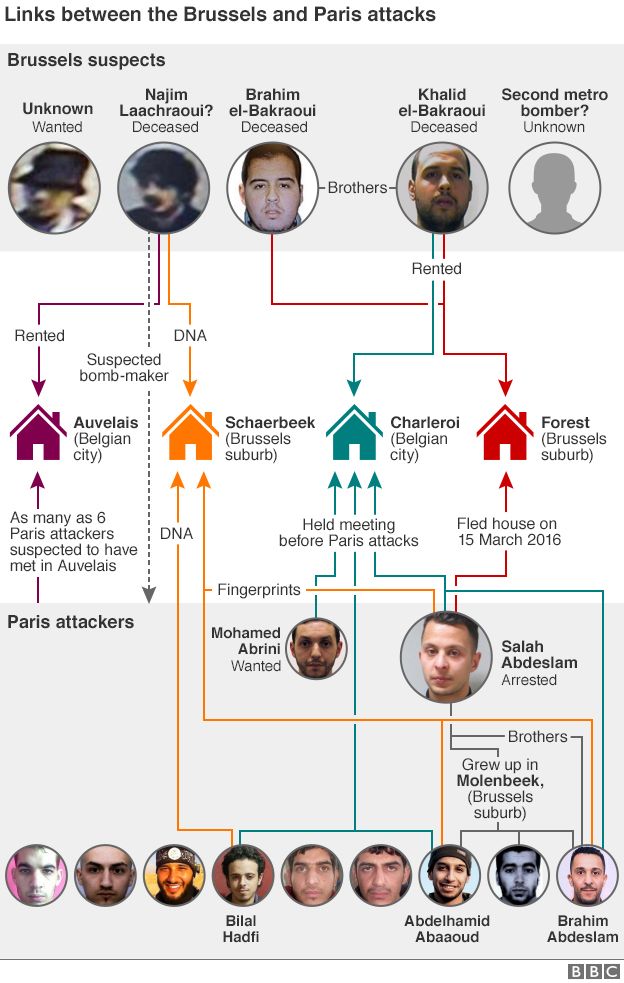